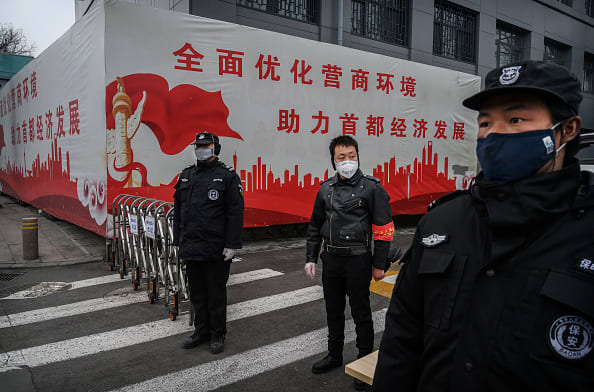 A Chinese man who is a member of the neighborhood committee, center, and security guards wear protective masks as they control entry and exit from a residential area on February 20, 2020 in Beijing, China.

Two prisons in China have reported about 250 cases of COVID-19 cases, with both inmates and prison guards getting infected.

On Friday, Xinhua news agency reported that 207 cases of the new coronavirus were reported in Rencheng prison as of Feb. 20. The state-owned agency was citing information from the Shandong provincial government.

Xie Weijin, the provincial judicial department chief was removed from his post as a result of inadequate epidemic prevention and control, Xinhua added.

All are being treated and isolated, the state news agency added.

A jail in the Zhejiang province has also reported a total of 34 infections, including 27 new cases this week. All of them are inmates, according to Chinese media. Two officials were removed from their post in this case, reported the Global Times, another government-owned news outlet.

China’s National Health Commission said there were 889 new confirmed cases as of Feb. 20, bringing the total confirmed cases to 75,465. The death toll in mainland China so far is 2,236.