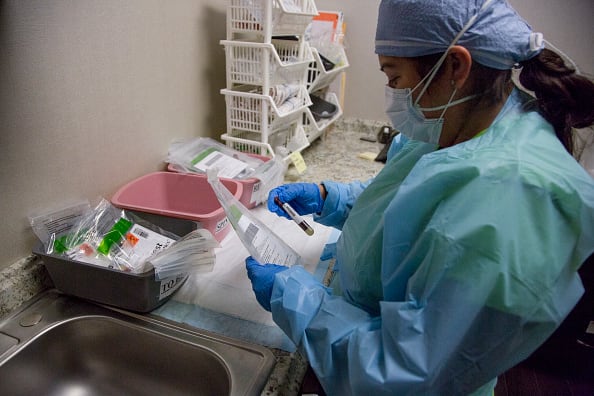 People across the U.S. gathered in mass protests against police brutality after the killing of George Floyd in Minneapolis, raising concerns of further virus spread through the demonstrations. More than 1.7 million people in the U.S. have tested positive for the virus and over 104,000 have died due to Covid-19. Black Americans have made up a disproportionate share of the deaths as underlying conditions, income inequality and disparity in access to health care have exacerbated the outbreak in the community.

Some state and city officials have urged protesters to seek Covid-19 testing and to limit movements in the weeks following the demonstrations in an effort to prevent infections.

This is CNBC’s live blog covering all the latest news on the coronavirus outbreak. This blog will be updated throughout the day as the news breaks.

The data above was compiled by Johns Hopkins University.

10:36 a.m. ET —Frontier Airlines became the first major U.S. airline to start checking passengers’ temperatures before they board, an attempt at calming concerns about the spread of Covid-19 in air travel.

The ultra-low-cost airline plans to use thermometer guns on travelers. If passengers have a temperature of 100.4 degrees or higher, they will be allowed to rest before getting a second check. If they still have 100.4F reading or higher they will be told “they will not be flying that day for the health and safety of others,” the airline said. “Frontier will work with that customer to rebook travel on a later date or otherwise accommodate the traveler’s preferences with respect to their reservation.”

Major U.S. carriers have said that it should be the government’s responsibility to check temperatures while labor unions have pushed for federal mandates, not just guidelines. The Department of Homeland Security, of which the Transportation Security Administration is a part, has said it’s considering traveler temperature checks but hasn’t yet provided a firm timeline. —Leslie Josephs

10:05 a.m. ET — As protests erupt across the U.S., officials are sounding the alarm that such mass gatherings could allow the coronavirus spread throughout the population.

“I think there’s going to be a lot of challenges coming out of the events of the past week,” former Food and Drug Administration Commissioner Dr. Scott Gottlieb said in an interview on “Squawk Box” on Monday. “One of them’s going to be that probably chains of transmission will have gotten lit by large gatherings. I don’t think there’s really a question about that.”

States have eased restrictions meant to curb the spread of the virus in recent weeks, particularly as some studies indicate the virus doesn’t spread as easily outdoors. However, the protests present a significantly larger risk to increasing spread of the virus, Gottlieb said.

Disclosure: Scott Gottlieb is a CNBC contributor and is a member of the boards of Pfizer and biotech company Illumina.

9:47 a.m. ET — Southwest Airlines is the latest carrier to offer employees voluntary separation and partially paid leaves, an effort to reduce headcount and to avoid layoffs or furloughs.

While airlines are suffering from a plunge in demand because of the pandemic, they are prohibited from laying off or cutting the pay rates of their employees through Sept. 30 under the conditions of $25 billion in federal coronavirus relief dedicated to supporting payroll.

Southwest told employees they can take a minimum of six months off and receive partial pay, and all benefits and travel privileges. Another option is a voluntary separation that includes travel privileges for four years and a severance package.

“The voluntary programs are the most generous packages ever offered in Southwest’s history and will assist with matching staffing levels to the current decline in demand due to COVID-19,” the airline said. The low-cost airline, which employed just over 60,000 people as of the end of 2019, boasts that it has avoided laying off or furloughing workers and that it wants to keep its streak going.

Fauci concerned about new cases as states work to reopen

9:35 a.m. ET — Photos of crowded bars and packed beaches have made Dr. Anthony Fauci, the director of the National Institute for Allergy and Infectious Diseases, concerned about a potential resurgence in coronavirus cases.

“If people want to get out, they’ve really got to gauge it with the level of the outbreak in their particular area,” Fauci said in an interview with STAT.

7:07 a.m. ET — Eli Lilly said it has begun dosing the first patients in a study of its potential antibody treatment for Covid-19.

The trial started ahead of that of rival Regeneron, which is also developing a potential antibody treatment. Eli Lilly said it expects results from the phase one study by the end of June. Phase one trials of the potential treatment, which uses antibodies from recovered patients to limit the virus’ ability to reproduce, aims to determine whether the treatment is safe for humans. A phase two trial would determine its efficacy in fighting the virus.

Antibody therapies could be used to prevent and treat Covid-19, said Dr. Daniel Skovronsky, Eli Lilly’s chief scientific officer. He added that the potential treatment was developed in partnership with AbCellera and researchers at the National Institute of Allergy and Infectious Diseases.

“We are privileged to help usher in this new era of drug development with the first potential new medicine specifically designed to attack the virus,” Skovronsky said in a statement. —Will Feuer

6:46 a.m. ET — Seafood processing company American Seafoods has confirmed that a further 85 crew members of one of its vessels have tested positive for Covid-19.

The testing of the entire crew of the American Dynasty followed a positive test of one crew member while the vessel was in port at Bellingham, Washington.

Results are pending for nine outstanding tests, the company said in a statement Sunday. It operates six fish processing vessels