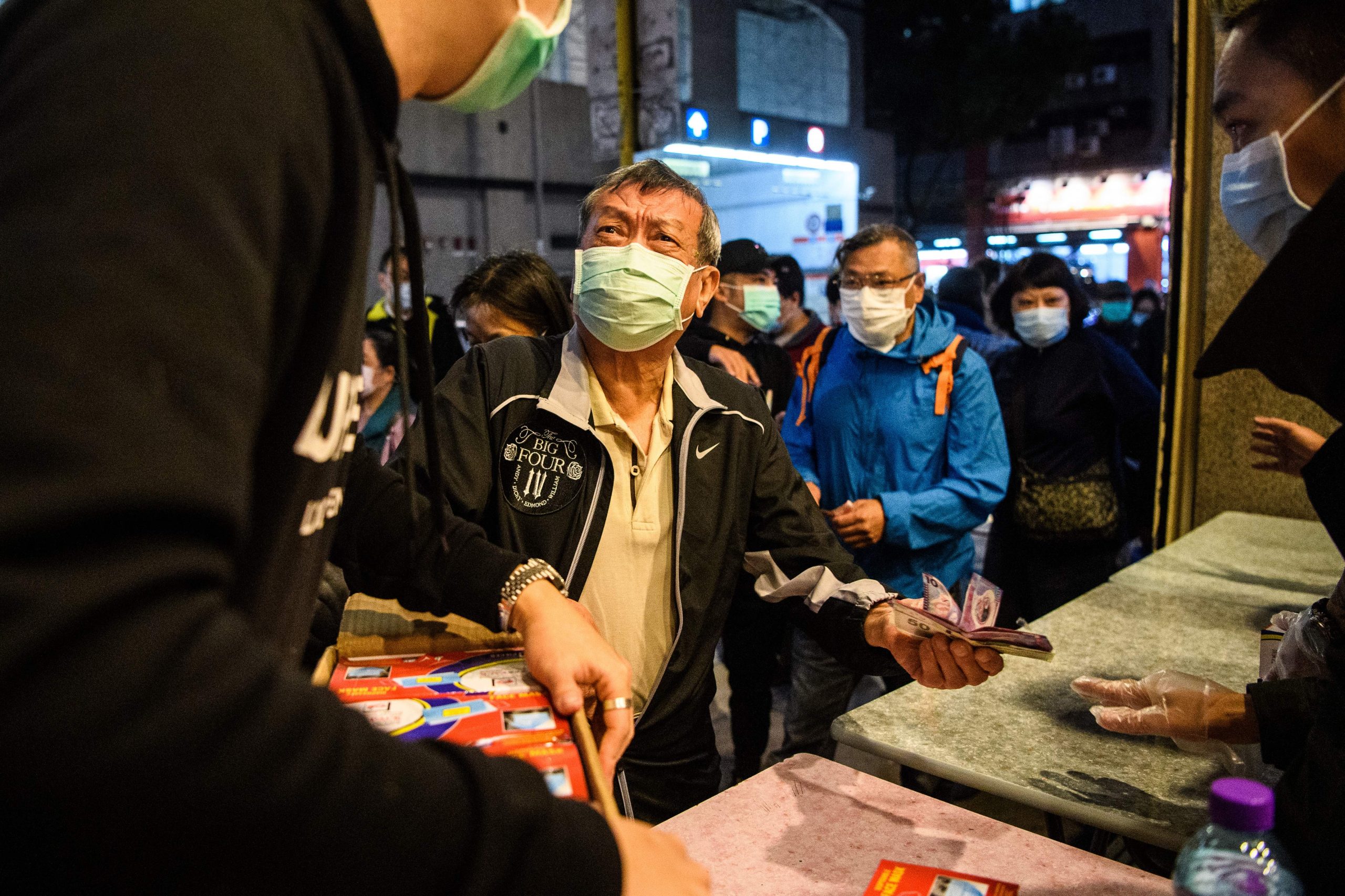 ‘Every rock has been turned over at least three times’

A man (C) wearing a facemask as a preventative measure following a coronavirus outbreak which began in the Chinese city of Wuhan, offers money as he reacts after being refused purchase of a box of face masks, after he claimed to have lost his sales registration ticket while queueing up to buy them, in Hong Kong on February 5, 2020.

Interest rates are so low that the hunt for investments that pay decent yield has gotten even harder.

The easy money policies of global central banks, including the Federal Reserve, are pressuring rates lower and keeping the markets awash with cash. At the same time, investors spooked by the coronavirus have been looking for safety, and that has driven Treasury yields and many other rates sharply lower. The benchmark U.S. 10-year note is offering under 1.6%, but the yields on all kinds of debt in Europe and Japan are negative.

That’s why investors are putting record amounts of cash into such investments as corporate bonds and emerging market debt. They also are considering preferred stocks, securities that pay a high dividend and are viewed as more steady than common stocks. As the stock market keeps rising to new highs, bonds also represent a way for investors to hedge their equity holdings.

In the week ended Feb. 12, investors put a record $23.6 billion into bond funds, and the flow into bonds is annualizing at nearly $1 trillion in 2020, according to Bank of America.

“This is a global reach for yield. Every rock has been turned over at least three times,” said Brian Funk head of credit research at MetLife Investment Management. For Funk, emerging market debt, both corporate and sovereign is a “least bad” choice for investors. “It’s offering value on a risk-adjusted basis at this stage in the cycle,” he said.

Strategists warn that it could be late in the game for some investors just jumping in, and from a price perspective, there may not be much appreciation. In the debt world, prices move opposite yields.

“We think we’re late in the credit cycle. We think there’s going to be a repricing of credit. Right now, the spread and yield advantage of high grade credit are about as narrow as we’ve ever seen,” said James Camp, managing director of strategic income at Eagle Asset Management.

“We think this asset class is an integral part of a globally diversified portfolio,” said Alejo Czerwonko, emerging markets strategist at UBS Global Wealth Management. Bonds like those from Brazil and Mexico, yield about 6.5%.

EMB, the iShares JPMorgan USD Emerging Market Bond Fund ETF is based on the JP Morgan emerging market bond index and as of Friday was up about 1.6% for the year so far. That represents the dollar-denominated bonds of more than 70 countries. In 2019, the ETF was up 10.3%. EMTL, the SPDR Doubleline Emerging Markets Fixed Income ETF was up 1.8% for the year-to-date.

Czerwonko said he dropped his overweight rating on the asset class several weeks ago. In 2019, the total return for EM dollar denominated sovereigns was 14.4% and he expects just mid-single digit returns this year. He also said he prefers high yield sovereigns over investment grade this year, and he would stick to dollar-denominated bonds which typically perform better than local currency.

“Taking a longer time frame for instance since the beginning of 2019, in early January country risk or once again the spread of dollar denominated emerging markets bonds was 410 basis points,” he said. “Throughout 2019, it came down all the way to close to 300. We saw a pretty dramatic fall in spreads. Spreads falling means yields falling, which means prices rising so the valuation of the asset class became less attractive.”

But still, strategists see value though investors should also beware of risks.

S&P Global Ratings said it sees the coronavirus outbreak as a “high” risk in Asia-Pacific and especially China. The ratings firm said, in a report, that there is an “elevated” risk for the rest of the world as of now, due to much lower infection and death rates outside China.

Some of the riskier names in the space include Argentina which is hoping to restructure its debt, though some strategists fear the country will look to reduce its debt payments. “Argentina’s government took a harder line with bondholders over the past week, strengthening our view that large haircuts are likely,” according to Capital Economics.

Argentina has given itself a deadline of March 31 to work up a restructuring of its debt, which equaled 95% of its GDP last year. Argentine bonds set to mature in 2028 were yielding over 20%.

Preferred stock has been attracting investors in their hunt for yield, because of their typically higher dividends and more bond-like profile.

There are ETFs that track preferreds such as PFF, iShares Preferred and Income Securities ETF, which represents the S&P U.S. preferred stock index, and yields about 6%. The ETF was up nearly 10% in 2019, and was up about 2% this year so far.

The Invesco Preferred ETF was up more than 11% last year, and is up 1.4% this year so far. The ETF tracks the BofA Merrill Lynch Core Fixed Rate Preferred Securities Index.

Preferreds have been a favorite vehicle for Warren Buffett, who bought Occidental Petroleum preferred shares last year and made out well on preferred share deals with Goldman Sachs, Bank of America and GE, after buying them up during the financial crisis.

Broadcom common, for instance, has a yield of 4.25%, while its preferred stock has a dividend of 7%. Preferred stocks are viewed as less volatile and better in a down market.

High yield corporate debt could have about the same yield but without price swings.

“We do buy preferreds. We loved them last year but they’ve had a massive rally,” said Camp. “They’re duration vehicles. Preferreds have rallied to the point where there’s no value left…most of the performance has been wrung out of them.”

Relatively speaking, corporate bonds might be more appealing to some investors.

Corporate bonds and high yield debt have been seeing record levels of inflows, and in the week ended Feb. 12, at $13.4 billion, the flows were the second largest ever, following $12.7 billion in the preceding week.

“We’re seeing record inflows to investment grade bond funds and ETFs,” said Hans Mikkelsen, head of high grade credit strategy at Bank of America Securities. “Every single day, money is coming in. This tends to be retail money too. Since we had interest rates declining, we’re likely to see inflows for awhile.”

Mikkelsen said retail buyers have been good support for the market. “Spreads are tight…Some large investors have chosen to go market weight on investment grade, and that’s fine because of the inflows,” he said. Strategists said large investors appear to be exiting some holdings in the corporate market and turning more to the mortgage-backed securities market, as they search for yield.

“For the year, we were saying we expected total returns of 4 to 6%,” for investment grade, said Mikkelsen. “That’s not bad. Obviously, given we had a big decline in interest rates, we’ve seen some of that return already. I think there’s still returns left in the asset class. If you look at different asset classes [in debt world], this isn’t going to be a big return year anywhere. I think corporate bonds are still a good place to be.”

Mikkelsen said for buyers of individual bonds, a good strategy is to buy one that looks about to be upgraded to investment grade from junk. The price should get a boost from speculation about the upgrade, and then it could see another boost if it issues debt, since it will be reviewed by analysts as a new issue.

There are also risks in bonds that could become so-called fallen angels. Kraft Heinz, for instance, was on the bottom rung of investment grade and there was speculation it would be cut to a junk rating. On Friday, Fitch downgraded it to junk.

Fitch said Kraft Heinz rating outlook is stable but it expects its leverage to remain elevated for a prolonged period. The rating agency said it made the move Friday, following Kraft’s comment about operating headwinds “which would suggest a nearly 8% EBITDA decline.” Fitch said it estimates the company may need to divest up to 20% of its projected 2020 EBITDA to support debt reduction.

In a note, BofA said Kraft Heinz is the seventh largest “fallen angel” on record, losing its investment grade ranking and moving to major high yield indexes after the end of month.

“The headwinds faced by KHC were well-known, idiosyncratic to the company and have no implications for other large BBB-rated structures. On the list of BBBs exceeding $20bn, KHC and Ford Motor Co are the only non-Energy names trading significantly wide to the BBB index, which is an indicator of elevated downgrade risk,” BofA strategists noted.