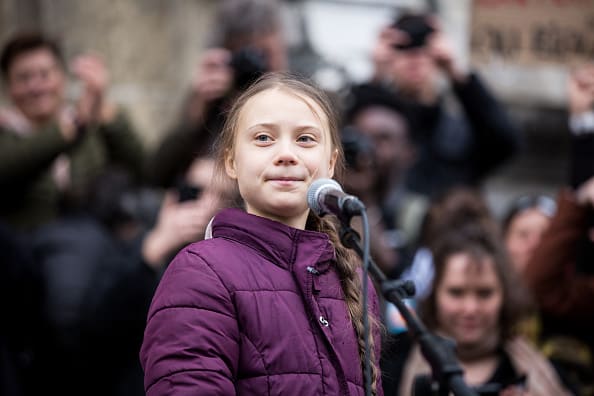 Swedish climate activist Greta Thunberg speaks to participants at a climate change protest on January 17, 2020 in Lausanne, Switzerland. The protest is taking place ahead of the upcoming annual gathering of world leaders at the Davos World Economic Forum.

Climate activist Greta Thunberg has used the 1 million Swedish Krona ($102,062) prize money she won in a recent award to launch a non-profit foundation.

Thunberg received the Right Livelihood Award, also known as the “alternative Nobel prize,” in December and the organization behind the prize announced Thursday that she used her winnings to establish The Greta Thunberg Foundation.

The young activist will focus her non-profit on promoting ecological and social sustainability, as well as mental health issues.

The 17-year-old announced in January via Instagram that she had set up a foundation, adding that she had applied to trademark her name and the “Fridays for Future” movement she created.

The Right Livelihood Foundation said that Thunberg transferred her prize money to establish the foundation, and the funds would also be used for its charitable purposes.

Thunberg said her foundation was “strictly non-profit” and she had “no interest in philanthropy,” in her announcement in January. She explained that the foundation was needed for “handling money (book royalties, donations, prize money etc.) in a transparent way.”

In addition to her this prize, Thunberg was also named Time magazine’s Person of the Year for 2019 for her influential work on climate change and was the youngest person to receive the accolade.

Thunberg shot to fame in 2018 for skipping school every Friday to hold a vigil outside the Swedish Parliament calling for action against climate change.

Ole von Uexkull, executive director of the Right Livelihood Foundation, said both “urgent and long-term actions were need to stop climate change and create societies that are sustainable from multiple perspectives.”

He added that mental illness was also a “growing problem around the world, which is often overlooked” and said that the Right Livelihood Foundation believed Thunberg’s non-profit would have “great impact and empower much-needed change.”