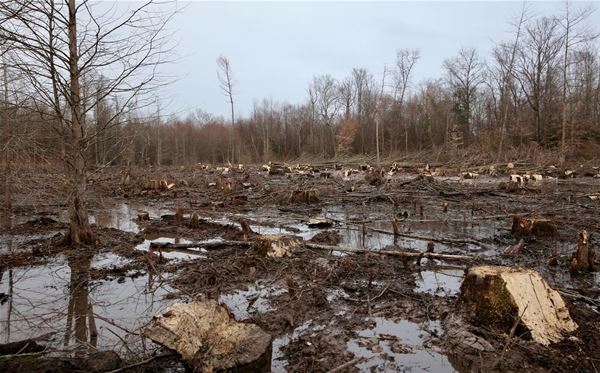 By: Wanda J. Thompson
In: ENERGY
With: 0 Comments

LONDON (22 June, 2020) – A coalition of environmental advocacy groups have launched Cut Carbon Not Forests, a hard-hitting campaign to expose the UK’s wasteful subsidies for companies that burn trees for electricity and to put pressure on policymakers to support reform. In the face of the escalating climate emergency, and as the UK government seeks a “green recovery” from the coronavirus pandemic, the new multichannel campaign, led jointly by Biofuelwatch, Dogwood Alliance, NRDC (Natural Resources Defense Council) and the Southern Environmental Law Center, calls for an end to these subsidies, redirecting billions of pounds to fill a critical funding gap for genuinely clean and renewable energy solutions like solar and wind.

The UK is the largest user of biomass electricity in Europe, backed by more than £1 billion a year in government subsidies, paid out via a fee on energy bills. However, burning wood in power stations is no better for the climate than burning coal. Further, much of the wood in question is cut down and shipped in from sensitive forests overseas, destroying habitats and wildlife. Cut Carbon Not Forests will spotlight British constituents’ outrage about the UK’s reliance on this false climate solution as they urge their local MPs to remove subsidies from companies that burn trees for electricity.

“The climate emergency requires us to build a genuinely clean-energy economy and end wasteful subsidies for dirty biomass energy,” said Almuth Ernsting, Co-Director of Biofuelwatch. “Cutting down trees, shipping them from forests overseas and burning them in power plants was never compatible with the need to keep global warming to 1.5 degrees; that’s even clearer today. It’s long past time to redirect this aid to genuine climate solutions like wind and solar energy.”

Research shows British public opinion aligns with a push toward biomass subsidy reform. YouGov polling found 82% of respondents were worried about the impact on wildlife if trees in forests were being cut down to supply power plants. Only 3% of respondents thought the government should promote biomass energy using trees shipped in from overseas forests, which is the UK’s primary source of supply. By contrast, a large majority said the government should promote solar and wind power.

“Our two biggest global environmental challenges – climate change and biodiversity loss – are inextricably linked, so keeping forests standing must be a priority of all governments,” said Sasha Stashwick, a senior advocate with NRDC. “Much of the wood burned in UK power plants is cut down and shipped in from ecologically sensitive forests in the Southeastern U.S. Those forests are efficient and powerful carbon-capture systems and support unique wildlife found nowhere else in the world.”

Years of on-the-ground investigations by journalists and local NGOs show that biomass imported into the UK energy market is commonly sourced from clear-cuts of mature hardwood forests in the U.S. Southeast. Once these forests are cleared, they are forever degraded.

In 2018, the UK government introduced new rules, which effectively stop subsidies for new wood-burning power stations. However, the rules do not extend to plants with existing subsidies. This loophole is most glaring for Drax, the nation’s largest biomass-burner, which still receives more than £2 million per day in subsidies despite serious concerns about the company’s impacts on the climate, air quality and forests.

Without further reform, UK energy billpayers will spend £13 billion in direct support to large biomass power plants through 2027 when most subsidies are due to end, including £10bn for Drax alone, according to a new report by climate think tank Ember. Moreover, Drax and other biomass plants not only benefit from billions in direct subsidies but are unfairly exempted from paying carbon taxes and thus indirectly subsidized with billions more in tax breaks. Over the entire period during which subsidies are available to burn biomass (2012-2027), the UK government will forgo £2.8 billion in carbon taxes, as revealed by Ember. Both these direct and indirect subsidies rest on the same false assumption that burning trees for electricity is a climate solution, yet government policy continues to lag behind scientific consensus.

Removing subsidies from companies that burn trees for electricity is the primary goal of Cut Carbon Not Forests, which directs viewers to a campaign website where they can take action by emailing their local MP.

ABOUT BIOFUELWATCH
Biofuelwatch is a UK/US non-profit organisation which undertakes research, campaigning and advocacy regarding the impacts of large-scale bioenergy. Biofuelwatch is working for a reform of energy policies to ensure that all support goes towards the lowest-carbon and cleanest forms of renewable energy as well as energy efficiency and conservation. See www.biofuelwatch.org.uk and follow us in twitter @biofuelwatch

ABOUT DOGWOOD ALLIANCE
Dogwood Alliance is a nonprofit environmental organisation based in the Southern United States that mobilises diverse voices to protect Southern forests and communities from destructive industrial logging. The group’s Our Forests Aren’t Fuel campaign is part of an international coalition opposing industrial-scale forest biomass energy. Learn more at www.dogwoodalliance.org and follow us on Twitter @DogwoodAlliance.

ABOUT NRDC
The Natural Resources Defense Council (NRDC) is an international nonprofit environmental organization with more than 3 million members and online activists. Since 1970, our lawyers, scientists, and other environmental specialists have worked to protect the world’s natural resources, public health, and the environment. NRDC has offices in New York City, Washington, D.C., Los Angeles, San Francisco, Chicago, Bozeman, MT, and Beijing. Visit us at www.nrdc.org and follow us on Twitter @NRDC.

ABOUT SOUTHERN ENVIRONMENTAL LAW CENTER
For more than 30 years, the Southern Environmental Law Center has used the power of the law to champion the environment of the Southeast U.S. With more than 80 attorneys and nine offices across the region, SELC is widely recognized as the Southeast’s foremost environmental organization and regional leader. SELC works on a full range of environmental issues to protect our natural resources and the health and well-being of all the people in our region. www.SouthernEnvironment.org