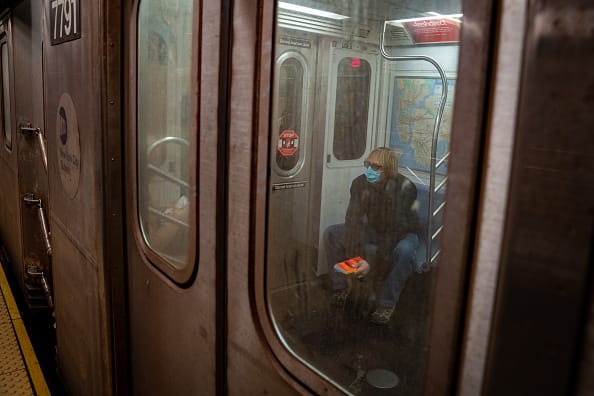 This is CNBC’s 24-hour live blog covering all the latest news on the coronavirus outbreak. All times below are in U.S. eastern time. This will be updated throughout the day as the news breaks.

A cruise ship on Egypt’s Nile River with over 150 tourists and local crew was in quarantine Saturday in the southern city of Luxor, as 45 people on board tested positive for the new coronavirus, authorities said.

A Taiwanese-American tourist who had previously been on the same ship tested positive when she returned to Taiwan, the World Health Organization informed Egyptian authorities, who then tested everyone on the ship.

Health authorities first found that a dozen of the ship’s Egyptian crew members had contracted the fast-spreading virus, and said they did not show symptoms, according to a joint statement from Egypt’s Health Ministry and the WHO on Friday. — AP

Gov. Andrew Cuomo declared a state of emergency after the number of confirmed coronavirus cases in New York increased to 76.

Eleven of the cases are in New York City and 57 are in Westchester County. There are also signals of an ongoing spread, including a pair of cases in both Saratoga County and Rockland County, as well as four in Nassau County, according to the governor.

The slew of cases in Westchester County trace back to a lawyer from Westchester, who was the second confirmed case in the state. –  Newburger

About 30 people remained trapped after a five-storey hotel being used for coronavirus quarantine collapsed in the southeast Chinese port city of Quanzhou, state media said.

About four hours after the collapse, the Quanzhou municipality said 38 of the 70 or so people who had been in the Quanzhou Xinjia Hotel had been rescued.

Rescue workers are seen on the site where a hotel being used for the novel coronavirus quarantine collapsed in the southeast Chinese port city of Quanzhou, Fujian province, China March 7, 2020.

The death toll from an outbreak of coronavirus in Italy has slowed down but the total number of cases in the country leapt by over 1,200, the Civil Protection Agency said.

Deaths due to the infectious virus were up 36 to 233, the head of the agency, Angelo Borrelli, said in a news conference. They were up 49 on Friday, in the biggest rise since the outbreak of the illness in Italy.

The total number of cases in the country was up to 5,883 compared to 4,636 announced on Friday, showing that contagion shows no sign of slowing down.

Borrelli added that of those originally infected, 589 had fully recovered while 567 were being treated in intensive care.

The contagion came to light over two weeks ago and is focused on a handful of hotspots in the north of Italy, but cases have now been confirmed in each of the country’s 20 regions, with deaths recorded in eight of them. –  Reuters

British health officials said that the number of confirmed virus cases in the U.K. has increased from 164 to 206, an increase of 42 since Friday.

Two people in Britain have died from the virus, the health ministry and the Public Health England agency said. More than 21,000 people have been tested for the virus. –  Newburger

Sanitary workers disinfect the church of San Domenico Maggiore in Naples city to counter the danger of a coronavirus infection (COVID 19).

10:26 am: Amtrak cancels nonstop Acela service between Washington and New York due to virus

Amtrak is canceling its nonstop Acela service between Washington, D.C. and New York City due to concerns over the virus. It will suspend service starting on Tuesday through May 26, and will suspend change fees on existing and new reservations for tickets bought before April 30.

“We are closely monitoring the coronavirus and are taking action based on guidance from public health experts,” the company said. –  Newburger

9:24 am: 70 people trapped after hotel used for coronavirus quarantine collapses in China

About 70 people were trapped in a collapsed hotel in the city of Quanzhou, in southeastern Fujian Province, the city government said on its website.

The collapsed hotel is used for coronavirus quarantine, according to the official People’s Daily. The building collapsed at around 7:30 p.m., and by 9 p.m., 23 people had been rescued, the city government said.

No reason for the collapse was given. –  Reuters

Officials confirmed on Friday that two people who recently attended the conference by the American Israel Public Affairs Committee in D.C. tested positive for the virus. Thousands of people attended the policy conference.

The D.C. Department of Health said in a statement that there’s no identified risk to the people who were at the conference.

“All attendees and members of the public are urged to follow the well-established prevention tips like staying home if sick and calling ahead to a health provider if experiencing symptoms,” the health department said. – Newburger

8:59 am: Pope cancels main public appearances and will stream them online

Pope Francis will not address crowds from his usual position in the window overlooking St Peter’s Square, the Vatican said Saturday, with his regular appearances being streamed online instead.

The move is an effort to prevent crowds from gathering as the coronavirus continues to grip Italy, with at least one confirmed case in Vatican City.

“These choices are necessary to avoid risks of spreading COVID-19 due to gathering,” the statement said.

The pontiff will also not hold his general audience from St Peter’s Square on Wednesday. Both addresses usually see thousands of people gather to hear the voice of the Pope. – Bishop

Two more people have died from the coronavirus in France, according to the country’s health ministry, bringing the total number of fatalities to 11. One of the deaths was in northern France and the other was in Normandy.

The number of cases in France has jumped by 103 over the past day, according to the French health ministry. There are now a total of 716 confirmed cases in France. – Kimball, Reuters

The Florida Department of Health announced late Friday that two residents have died in the coronavirus outbreak. The cases are the first known deaths in the state.

According to the state’s health department, there have been 11 positive new coronavirus cases in the state as of Friday at 9:57 p.m. ET. – Wang

Another Diamond Princess cruise ship passenger has died, according to NHK , Japan’s public broadcaster. This brings the death toll from the ship to seven.

The Diamond Princess ship is believed to be the site of what might have been the first major COVID-19 epidemic outside of China. It was quarantined at a Japanese port on Feb. 4 after a previous guest, who didn’t have any symptoms while aboard the ship, tested positive for the virus.— Bishop, Reuters

The leader of Italy’s co-ruling Democratic Party, Nicola Zingaretti, has tested positive for the coronavirus, he said in a video on Facebook Saturday.

“I’m fine but I’ll have to stay home for the next few days,” he said.

Italy is Europe’s epicenter of the coronavirus, with at least 4,636 confirmed cases and 197 deaths as of Saturday. — Bishop

Fifteen Americans have been quarantined in a Bethlehem hotel over coronavirus fears, a Palestinian government spokesman told Reuters.

Spokesman Ibrahim Melhem said there was an American delegation at the hotel, “and they are being dealt with according to quarantine regulations like all the others who are there.”

Palestine currently has at least 22 confirmed cases of the virus and has declared a state of emergency. — Bishop

Officials at Stanford University have announced that a member of faculty has tested positive for COVID-19.

The school has contacted those who might have come into contact with the person and asked them to self-isolate. The staff member worked in a clinic, which has been closed for cleaning.

The faculty member had not been to work since showing symptoms, Stanford University said.

Meanwhile, in an online letter published late Thursday, Provost Persis Drell announced that for the last two weeks of the winter quarter, beginning March 9, classes at Stanford would not meet in person.

“To the extent feasible, we will be moving classes to online formats in place of in-person instruction,” Drell said. — Bishop

12:40 am: NBA tells teams to prep contingency plans for games without fans

The National Basketball Association advised officials to prepare contingency plans should the coronavirus outbreak continue to spread. The NBA said teams should identify “actions required if it were to become necessary to play a game with only essential staff present” without fans or media, according to a copy of the memo obtained by CNBC.

The memo said teams should also “prepare for the possibility of implementing temperature checks on players, team staff, referees, and anyone else who is essential to conducting such a game in the team’s arena.”

One league executive told CNBC the league hasn’t considered canceling or playing games without fans, but the memo was sent to organizations as a precaution. — Young

2020-03-07
Previous Post: Amazon is secretly working on a cure for the common cold
Next Post: Amtrak cancels nonstop Acela service between DC, NYC due to coronavirus