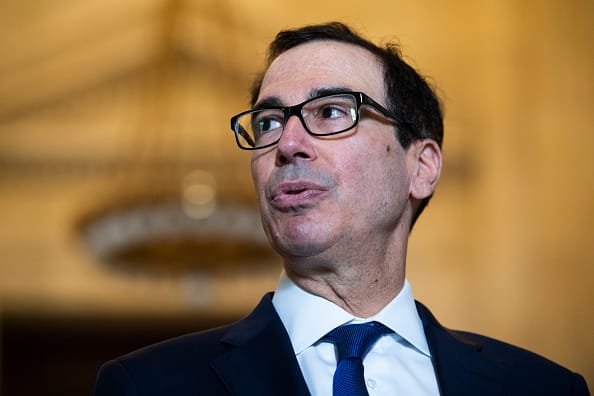 Treasury Secretary Steven Mnuchin on Sunday said Republicans have finalized their latest piece of coronavirus relief legislation, worth about $1 trillion, and intend to introduce it Monday.

“We do have an entire plan,” Mnuchin said on “Fox News Sunday.”  “The [Trump] administration and the Senate republicans are completely on the same page,” he added.

Mnuchin said he hopes Congress can work in a bipartisan manner to approve the Republican proposal, which is expected to have another round of $1,200 stimulus checks for Americans and liability protections for businesses and schools.

It also will modify the federal unemployment insurance supplement to include about 70% wage replacement for individuals, he said, instead of the $600 boost in weekly benefits for all recipients. That benefit, which was a key component of the $2.2 trillion CARES Act, came to an end.

“We can move very quickly with the Democrats on these issues. We’ve moved quickly before and I see no reason why we can’t move quickly again. And if there are issues that take longer, we’ll deal with those as well,” Mnuchin said.

White House economic advisor Larry Kudlow on CNN earlier Sunday called the Republican proposal a “very well rounded package.” He also said the Trump administration intends to extend the federal moratorium on evictions, but didn’t specify whether that would be in this legislation.

“This will be the fifth set of legislation so there’s no reason why can’t have number five, six and seven as we need to deal with issues,” added Mnuchin on Fox. “And obviously, anything we do we need bipartisan support.”

House Speaker Nancy Pelosi said Democrats have been “anxious to negotiate” with Republicans since mid-May, when the lower chamber approved a $3 trillion coronavirus rescue package. The bill, passed almost entirely with Democratic votes, went nowhere in the GOP-controlled Senate.

“They’re in disarray and that delay is causing suffering for America’s families,” Pelosi said of Republicans on CBS’ “Face the Nation.” “We have been ready for two months and 10 days.”

Pelosi added that the House, which has a recess scheduled for August, “can’t go home without” the next piece of coronavirus legislation being approved.

She also appeared to push back on the Republican’s plan for the federal unemployment supplement, suggesting that calculating a specific amount for each person would be difficult.

“The reason we had $600 was its simplicity and figuring out 70% of somebody’s wages, people don’t all make a salary. They makes wages, and they sometimes have it vary,” she said. “So why don’t we just keep it simple?”

Republicans contend that continuing the $600 weekly benefit could inhibit the U.S. economic recovery since some workers may make more money on unemployment insurance than they did on the job.

House Democrats in their May legislation extended the $600 weekly benefit through January. Senate Democrats have proposed linking the level of the federal supplement to state unemployment rates; under the proposal, the amount of the weekly benefit would be reduced as the economic conditions in a state improve.